SOME CONTENT NOW UPDATED DUE TO THE NEW FEATURES ADDED IN MPC 2.10. Akai have announced a new addition to the  MPC family, the MPC One, which looks set to become Akai’s new ‘entry level’ standalone MPC. So, is this the MPC you’ve been waiting for? In this MPC One Preview, we’ll take a closer look at what this new touchscreen standalone MPC is all about.

Visually speaking, the MPC One is like a hybrid of the MPC Live and MPC Studio with a compact, square layout and pads directly under the screen. 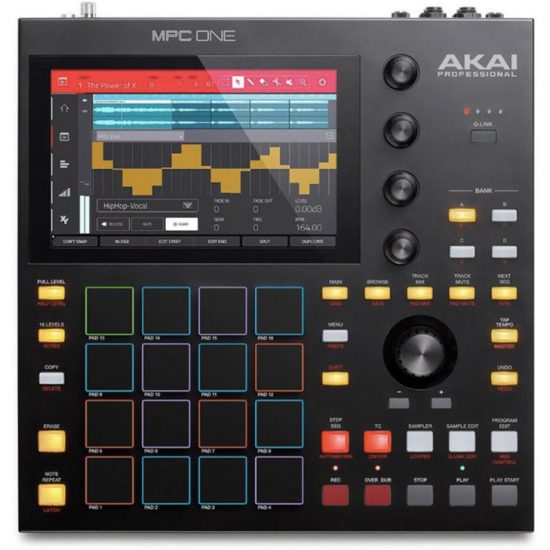 In terms of pads, buttons and dials, all the usual suspects from the MPC Live/Touch are there, although the pads themselves are slightly smaller than the ones on the Live/X, but I don’t think this will be an issue at all.

There’s 4 physical q-links and the three banks of ‘virtual qlinks’, data wheel, full level, note repeat and bank buttons, but there’s also a bunch of extra buttons, including dedicated mode shortcuts which is a very welcome move and will mostly give you a slightly quicker workflow for some tasks.

However, like the Live/Touch before it, we’re missing dedicated ‘LOCATE” buttons for quick hardware-based sequence navigation, so this has to be performed in the software.  It would have perhaps been nice to see Akai utilise the empty space between the Q-link and bank select buttons, maybe a set of 4-direction cursor keys, or metering or even just master and recording level dials.

Taking a peak around the back of the unit we see some interesting inclusions and omissions.

CV/Gate outputs are a cool addition which puts it on par with the MPC X and Akai Force, and there’s now an ethernet port for a nice and stable Ableton Link connection (on the Live you either had to rely on wifi or a USB-to-ethernet adapter), plus a USB port for connecting USB disks and MIDI controllers. The MPC One does not have bluetooth, so Bluetooth keyboards are NOT supported. WIFI is also missing on this unit.

In addition to USB disk support, there’s also an SD card reader at the front of the unit, however it seems like the internal SATA drive option found on the Live/X/Force is not available in the MPC One. Akai do mention that there’s a spare 2GB of space available on the factory-fitted internal drive, but as is the case with the Live/X, it’s not possible to access this drive for backup purposes, so I would recommend using a fast SD card or a low profile USB flash drive (that said, the USB port is only USB 2.0, not the USB 3.0 found on the Live/X, so speed might be an issue).

Looking at I/O, there is now only a single set of stereo outputs compared to the Live’s six, plus there’s also only a single set of 5-pin MIDI IN/OUT.  There’s also no longer any dedicated turntable inputs, so if you don’t have a ‘line level’ output from your turntable you’ll need to run them via a suitable preamp or DJ mixer. It also looks like there’s no mic preamps either. However since MPC 2.10 you can connect class compliant USB audio interfaces to the MPC One which will replace the MPC’s internal audio interface. So in theory you can have up tp 32 ins and outs, plus whatever pre-amps and MIDI ports are available on your interface.

Although it only has a single 5-pin MIDI input, it’s worth remembering that MIDI controllers can also be connected via USB to the MPC One, so it’s possible to have up to multiple MIDI controllers simultaneously attached (in addition to the pads). And with MPC 2.8 you are now able to assign a different MIDI controller to it’s own track, and/or as a ‘master’ controller (which means it will act the same as the pads, i.e. always controlling the currently selected track) .

A single MIDI OUT Port is also a potential limitation if you have an army of hardware synths and other gear you wish to trigger and sync with your MPC, but as I’ve mentioned above, the MPC X is probably more suitable in this case, although a second hand MPC Live might still be the better option if you need portability and those additional MIDI and audio ports.

The first thing to note is that the MPC One does NOT contain an internal rechargeable battery. So, no true ‘beats on the go’ option here, as even in ‘controller mode’ the MPC One still needs additional juice from its supplied PSU (the MPC Studio is the only current MPC model that can run entirely on USB bus power). But it’s still a portable machine, so certainly travel-friendly.

In terms of the CPU and memory, the MPC One is advertised as having a ‘Powerful Multicore System from the MPC Live and MPC X’, so it sounds like it’s running the exact same board used in the Live/X and Force, which features a non-upgradeable 2GB of RAM and a 1.6Ghz quad core ARM Cortex-A17 CPU.

With the Live/X, approximately half of this 2GB of RAM is immediately used up by the firmware, so I’d assume this will also be the case with the MPC One, meaning there’s around 1GB of usable RAM (see my MPC Memory Article for more info).

The amount of available RAM seems to be one of the biggest points of social media contention with all these new standalone MPCs. In reality, 1GB of usable RAM is still very good for a standalone sampler, but will invariably become very limiting once you start introducing multiple audio tracks and more complex keygroup instruments. The solution, as used by some of the MPC’s competition, is to add the option of direct disk streaming, utilising any attached storage to take over from the RAM, and in the Sonic State video below, Andy Mac confirms that this is being worked on for a future firmware release.

As of MPC 2.10, the MPC One is running the same version of the MPC firmware used in the MPC Live and MPC X. Also pre-installed is the obligatory sample library, which apparently contains completely different content to the Live/X.

Now, the MPC firmware has come some way since the MPC Live/X were introduced and while development has slowed somewhat compared to the first 18 months, it’s still updated every few months with new features and bug fixes, with Akai now running a public beta testing forum to iron out any issues before release of any new updates.

The MPC’s firmware features are so head-spinningly extensive it’s actually difficult to know where to begin describing what’s on offer (a separate MPC firmware review should be coming soon). Suffice to say the MPC is becoming a true standalone jack of all trades, with midi sequencing (performed via piano roll, step seqeuncer, list editing and live recording), humanizing and extensive quantizing & swing features, audio tracks, extensive sampling and editing, a very large suite of quality FX plugins, three custom synth instruments, ‘pad perform’ mode (automatically play chords and notes in the correct scale), arpeggiator, autosampler, looper, song arrangement and FX/parameter automation, plus a whole lot more. This is all controlled via the touch screen UI and completely standalone, although if you need more grunt and features (e.g. VST support) you can connect the MPC to your computer and continue your project in the MPC Software or as a plugin in your favourite DAW. Yes, that’s right, the MPC One also includes a full MPC Software license (the MPC Software is the Mac/PC version of the MPC firmware, which can be run independently or controlled via an attached MPC).

As you can imagine, everyone has their own personal list of ‘must have features’ that the MPC firmware is currently missing, but let’s cut to the chase; take a look at those specs, look at all the features the MPC firmware already has and tell me what other standalone sampler even comes close? Sure, other samplers might do one or two particular tasks better than the MPC, but when it comes to offer the complete package, the MPC is in a league of its own. And then there’s the price…

At $699, the MPC One pricing is aggressively competitive and puts it in the same ballpark as Maschine Mk3 , which is of course, not even a standalone unit. That’s also cheaper than an Elektron Digikat and half the price of an Octatrack. Remember this also includes an MPC Software license (normally $200, although often available in sales for $99). No matter which way you look at this, it’s an absolute bargain. With the recent $500 price drop of the Force it certainly seems like Akai are going for the jugular and the competition really needs to take notice.

Existing MPC Owners – Should you Upgrade To An MPC One?

So, will MPC Live owners be swapping their Live for an MPC One? Well, generally speaking you’re probably going to see the One as a bit of a downgrade; it has less audio and MIDI I/O, smaller pads, no wifi or bluetooth, no internal SATA option, USB 2.0 not 3.0, no Ableton Live control and no battery option. However the form factor and extra buttons could potentially tempt you over, as could those CV/Gate outputs.

MPC Touch and MPC Studio owners on the other hand will probably see the MPC One as a low cost opportunity to have the option of a modern standalone MPC experience (and remember the MPC One can still act as an MPC Software controller if you still want the more ‘hybrid’ approach). For MPC Touch owners the transition will be fairly seamless as there will be no new software to learn (the MPC Touch’s interface is identical to the touchscreen UI found on the MPC One).

For legacy MPC owners, the MPC One might just be the perfect way to maintain their standalone workflow while gaining all those modern features the older machines are lacking.

With its competitive pricing and extensive set of features, the MPC One looks set to be a great ‘entry level’ standalone MPC that will no doubt entice many new producers into the MPC world. Existing MPC Live users will no doubt be a little disappointed to have not seen an ‘MPC Live XL’  type of release at this year’s NAMM, but hopefully if the MPC One is a success, Akai will have plenty of motivation to continue developing both the MPC hardware and MPC firmware for many years to come.

The latest edition of my complete guide to Akai’s standalone touchscreen MPCs, the MPC Bible, is fully compatible with the MPC One – inside you’ll find hundreds of pages of MPC beat making tutorials, all fully compatible with the latest MPC firmware. And if you’re looking for instruments and drum kits tailor made for these new MPCs, check out my range of MPC Expansions, featuring the world’s largest collection of multisampled acoustic MPC instruments and drum kits!