In this MPC X, MPC One, MPC Key & MPC Live tutorial we’ll quickly put together a realistic sounding MPC ‘cycle’ kit that uses round robins to emulate the subtle timbre variations found in acoustic instruments like drums. This tutorial is adapted from my standalone MPC tutorial course, The MPC Bible. This tutorial is also suitable for the MPC Touch running MPC Software 2.10 (or greater).

What Are Cycle kits?

Consider a drum kit consisting of a kick on pad A01, a snare on pad A02, a closed hat on pad A03 and an open hat on pad A04. In a basic kit we simply assign a single sample to each pad but this means that each time you, for example, hit the snare pad, it will always sound exactly the same. However in real life the snare would always sound slightly different each time it was hit, that’s just the nature of playing an acoustic instrument – these small changes in timbre can be due to you hitting the snare in a slightly different position or hitting it at a different angle, or not hitting it quite as hard.

An MPC ‘cycle kit’ lets us mimic this natural variation in sound by configuring each pad to play back a different ‘variation’ of the instrument each time it is hit, giving us a kit with a much more realistic feel.

Creating your own cycle kit is really easy; you just need a cool drum break and an MPC. Let’s get building.

In order to start building a cycle kit, the first step is to source the drums. We’ll need at least two natural variations of each drum instrument, preferably played at a similar velocity – the more variations we have, the more realistic our kit will sound, however the MPC can only handle a maximum of four variations per pad. A good way to grab some great sounding drums is to chop them from a great sounding live break! Chopping techniques are beyond the scope of this tutorial, but I cover them all in great detail in the MPC Bible.

For the purposes of this tutorial I’m going to use a bunch of chops I made using a couple of my favourite Timmy Rickard breaks from his epic ‘Dirty Drum Breaks Vol 1’ collection. You can download everything you need here.

Once you’ve downloaded the tutorial files, you’ll need to transfer them to your MPC disk. If you need help with this check out my ‘MPC File Transfers‘ guide over at MPC-Samples.com.

Start with a new blank project. Now go to the BROWSER and under Places select the disk your transferred the tutorial files folder to. Navigate inside the ‘Cycle Kit Tutorial Files’ folder inside you’ll see a folder called ‘Chopped Drums’ – single tap to select it. Now hold down SHIFT and select LOAD ALL. All the samples inside the ‘Chopped Drums’ folder are now loaded into your current project. Go to MENU > PROJECT to view the PROJECT panel: 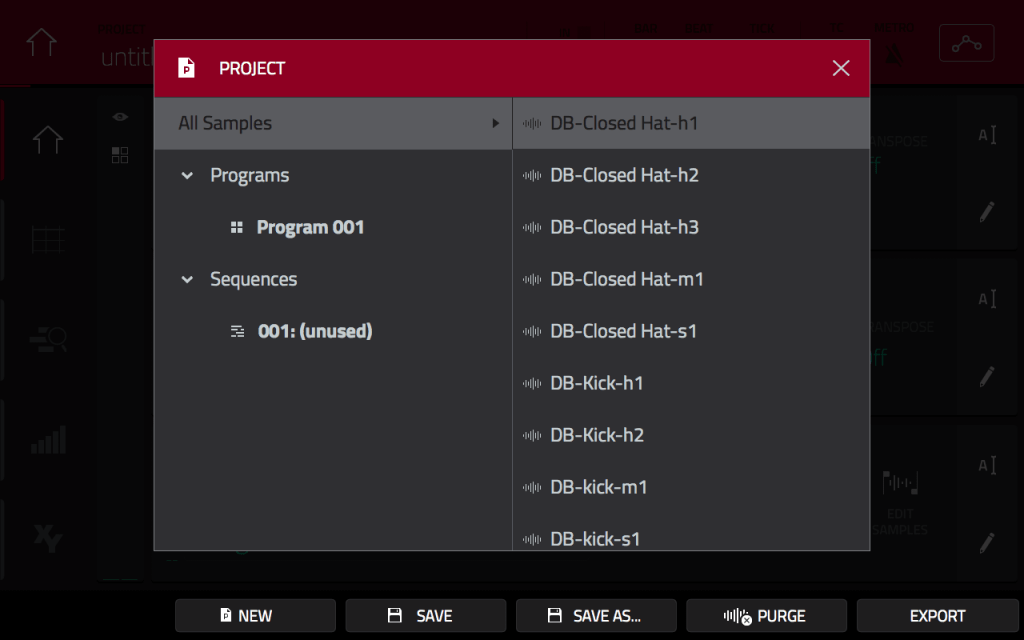 Tap the ALL SAMPLES filter (top left of the Project Panel) and on the right you’ll see a list of all the chops (which I have renamed to make life easy for us)! As you can see, we have multiple variations of each snare, kick, closed hat and open hat. Each variation is named according to how hard it was hit, for example:

After chopping a break into individual extracted samples I’ll then go through each sound and ignore the ones I have no need for. If I’m building a kit I really just want ‘pure’ sounds, so for example my kicks shouldn’t have a hi hat in the background, and my hats shouldn’t have the snare tail overlapping them. I just want good sounding, ‘standalone’ drum samples.

After quality control I’ll then rename the sounds by instrument type (snare, kick, etc) and then use my ears to decide on an approximate velocity to assign to each sample – for this tutorial I just used to hard (H), medium (M) and soft (S), but you could use more granular labelling, including ‘medium soft’, ‘extra hard’ etc. In my multisampled drum kits I’ll often use standard musical dynamic notation  (ff, f, mf, mp, p, pp), or you could even use MIDI velocity numbers (127 = hardest, 1=softest) – just chose whatever works best for you.

Setting Up The Basic Drum Kit

The first step is to set up the bare bones kit layout using just one sample per pad. Go to MAIN and hit the ‘A’ end of the DRUM PROGRAM row; give the default DRUM program the name ‘MPC Cycle Kit’. 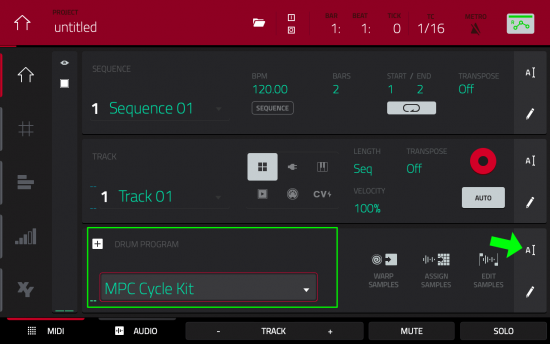 Now go to PROGRAM EDIT > SAMPLES and hit pad A01 to select it. Now, our chopped break has given us lots of drums at varying velocities (i.e. soft, medium and hard) but in a ‘pure’ cycle kit we’ll usually just use the same velocity for each instrument, typically a ‘hard’ hit.

So single tap on LAYER 1 of pad A01 and turn the data wheel to assign a ‘hard’ kick drum sample, DB-Kick-h1: 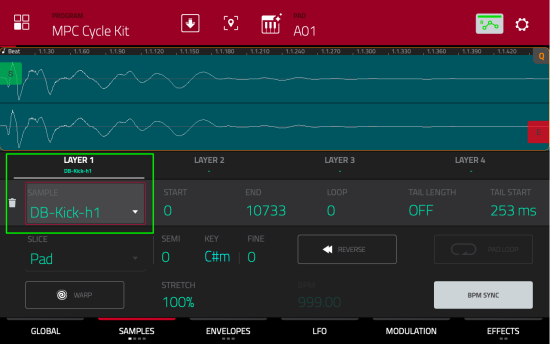 Now select pad A02 and assign a ‘hard’ snare; DB-Snare-h1. On pad A03 assign a hard closed hat, DB-Closed Hat-h1 and finally on pad A04 assign a hard open hat, DB-Open Hat-h1. Play the four pads to hear the basic kit in action – it already sounds pretty good, but that’s because we started with a great break!

Adding The Round Robins

Each pad in an MPC DRUM program consists of 4 unique layers and you can assign a unique sample to each of these layers. By default the layers on a pad are set to play in unison (which is handy for drum layering – see my ‘Clap From Hell tutorial), but for cycle kits we instead set the pad to play the layers in a ‘round robin’.

In a ‘round robin’ the MPC will only ever play a single layer each time the pad is hit, however it will be a different layer each time. To set up a round robin we first need to fill some more pad layers with samples. Select pad A02, tap on the LAYER 2 tab assign our second ‘hard’ snare sample DB-Snare-h2. 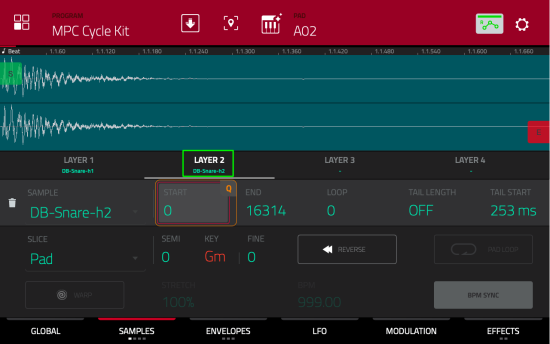 If you prefer you can also assign samples to layers in the second SAMPLES screen; to access this screen, press the SAMPLES button again so the second white dot underneath the button is active: 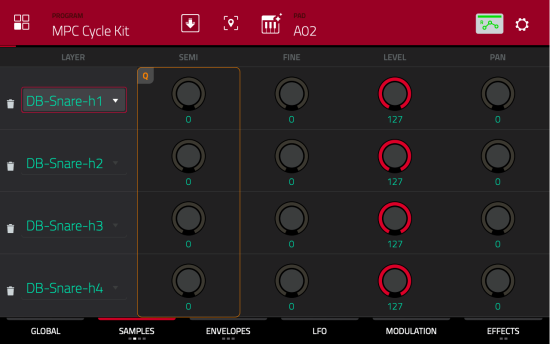 If you hit pad A02 you’ll hear all four snares play in unison (watch those speakers…). To change the playback to a ’round robin’, go to the PROGRAM EDIT > GLOBAL screen and take a look at the LAYER PLAY setting in the third column: 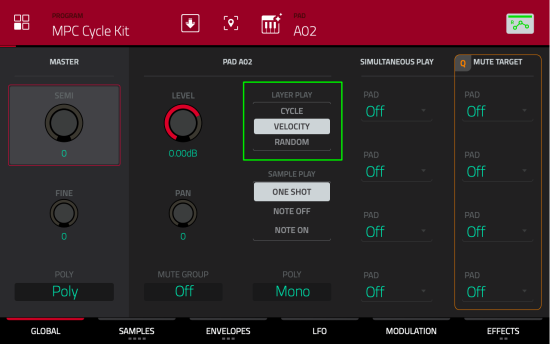 This setting dictates how this pad will handle layer playback. To create a round robin between layers we can choose either CYCLE or RANDOM. ‘CYCLE’ will play the layers in a ‘cycle’ (hence the name ‘cycle kit’), e.g. the first hit will play layer 1, the second pad hit will play layer 2, and so on. With LAYERS set to RANDOM, the pad will randomly play one layer from the available pool.

Let’s set our snare pad to a ‘cycle’ round robin, so set LAYER PLAY for pad A02 to CYCLE. 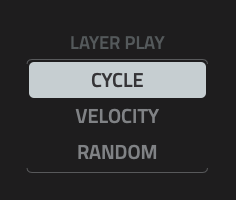 Now start to continually hit pad A02 and you should hear that each time we hit the pad the snare sounds very slightly different, just like a real snare would sound when hit multiple times in succession.

Let’s so the same for the closed hat. As you are already in the MASTER screen, hit pad A03 and change the LAYER PLAY parameter – this time try to RANDOM. Then in PROGRAM EDIT > SAMPLES ‘2’, assign DB-Closed Hat-h2 to LAYER 2 and DB-Closed Hat-h3 to LAYER 3. 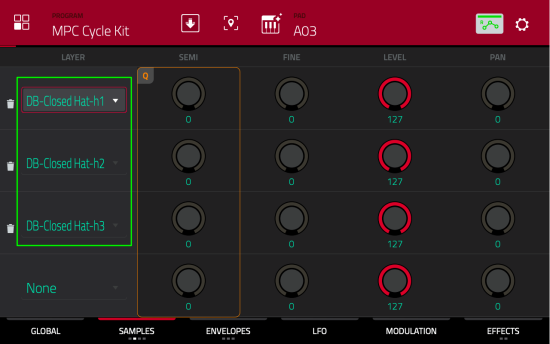 We don’t have a fourth ‘hard’ closed hat sample, but that’s not a problem as the MPC simply ignores any empty layers when playing a round robin. Now continually hit pad A03 to hear the ‘random’ round robin in action.

Finally set up the kick and open hat in a similar way. The chopped break only gave us two ‘hard’ variations each of these instruments but that’s still better than using a single sample. Assign the DB-Kick-h2 and DB-Open Hat-h2 samples to LAYER 2 on pads A01 and A04 respectively, and then set your choice of either CYCLE or RANDOM.

Which round robin setting is best? Generally I prefer RANDOM although sometimes you will sometimes get the same layer played twice in succession, but I do prefer the pure unpredictability of this option.

Now go to PROGRAM EDIT > GLOBAL, select pad A03 and on the MUTE TARGET row, set the first PAD setting to A04 (our open hat). 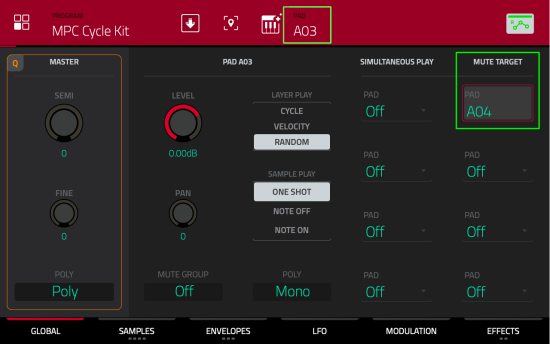 The closed hat on A03 now always ‘mutes’ the open hat on A04, which does a pretty good job of mimicking the way a real hi hat functions. At this point you can perhaps head over to the PAD MIXER and tweak your levels and panning, then head over to MAIN > PROGRAM ROW pencil > PAD COLOR and colour-code your pads. I like using the ‘Fixed’ option, using ‘Single Pad’ to assign a different colour for each instrument type (red for kicks, blue for snares, green for hats): 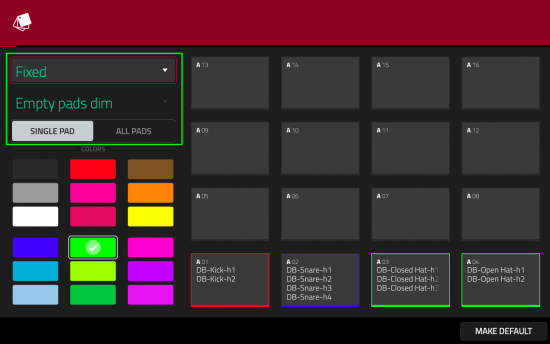 This is just a basic kit to show you how round robins are set up but we can make a pretty amazing ‘finger drumming kit’ by combining round robins with ‘dynamic switching’, velocity sensitive envelopes, randomisation, drum layering, effects, LFOs and filters, and I cover all these techniques and more in my complete hands-on standalone MPC tutorial guide, ‘The MPC Bible’.