MPC 2.10 brought us a wealth of new features including a bunch of new plugin instruments, new FX and USB audio interface support. However Akai also sneaked in a bunch of smaller features, many of which seem to have gone completely unnoticed. One of these is a third type of pad ‘sample play’ called NOTE OFF.  In this tutorial I’m going to look at the three different ‘sample play’ options now available to us in a DRUM program and how they can all be used to create a realistic sounding opening/closing hi hat.

What Exactly is ‘SAMPLE PLAY’?

Download the tutorial files, unzip and transfer to your MPC disk. From the BROWSER, enter the ‘Note Off Tutorial Files’ folder and load the drum kit ‘Simple Kit.xpm‘. Go to MAIN and assign this kit to an unused sequencer track.  This kit has five pads already configured – a kick on A01, a snare on A02, a closed hat on A03 and the same open hat sample assigned to pads A04 and A05.

Go to PROGRAM EDIT > GLOBAL and hit pad A04 (the open hi hat pad). As you can hear, when you hit this pad, the open hat sample plays from start to finish, you do not have to hold down the pad for the open hat to continue playing. Locate the SAMPLE PLAY parameter: 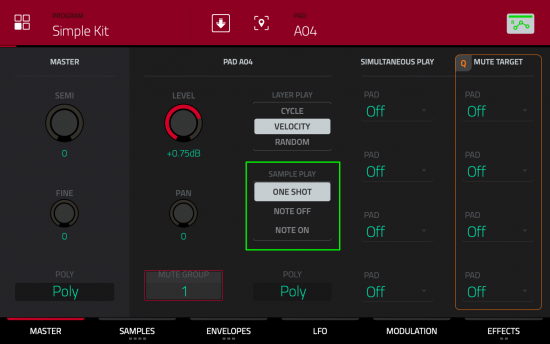 The SAMPLE PLAY parameter shows that our open hat pad is configured to be a ONE SHOT pad.  With a one shot pad it doesn’t matter if you quickly jab the pad or press and hold it for several seconds, the pad always just plays the sample from start to finish.  ‘One Shot’ is the default SAMPLE PLAY option for all pads in a DRUM program.

Now typically in a drum kit which contains separate closed and open hat samples, we would configure the closed hat to ‘mute’ (or ‘choke’) the play back of the open hat, and this is how I’ve configured pads A03 and A04. Try it out – hit pad A04 (the open hat) and while it is playing, hit pad A03 (the closed hat) and you’ll hear the closed hat instantly mutes the open hat, giving us a reasonable emulation of a real hi hat opening and closing.

This  open hat muting  was achieved using MUTE GROUPS. While in the GLOBAL screen, look at the MUTE GROUP parameters for pads A03 and A04; both are set to MUTE GROUP ‘1’: 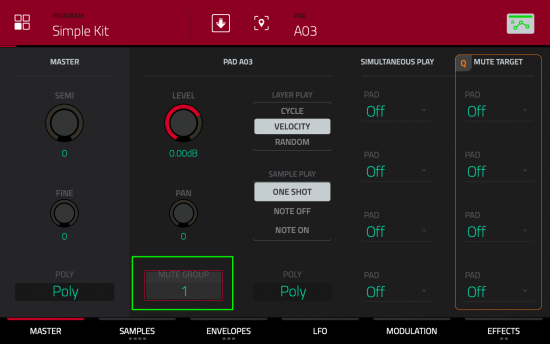 Any ONE SHOT sample assigned to mute group 1 in this kit is going to have its playback muted or ‘choked’ whenever another sample from mute group 1 is played (we could alternatively use MUTE TARGETS for this, but I’ll leave that for another tutorial).

So far we have what is probably what has always been considered the ‘standard’ way of dealing with playing open/closed hi hats in an MPC, using a combination of ONE SHOT playback and pad muting.

Now select pad A08. This is the same open hi hat, but this time I’ve configured the pad a little differently. In the GLOBAL screen you’ll see that this pad is not set as a ONE SHOT, instead the SAMPLE PLAY parameter is set to NOTE ON: 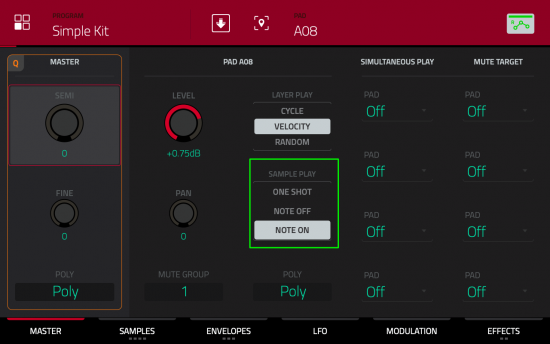 A ‘note on’ pad will only play for as long as you hold down the pad, giving you full control of the duration of sample playback. To create the open/close hat action with this style of open hat, we simply release the open hat when we want the ‘opening’ sound to finish; we must then immediately hit the closed hat on A03 to complete the open/close action.

Give it a go – it’s possible to make the open/close action sound the same as the muted one shot example, but it’s definitely more tricky to perform. But bear with me…

Select BANK B and then hit pad B08. Go to PROGRAM EDIT > SAMPLES and assign our closed hat sample, HiHat-UC chh 018 to LAYER 1: 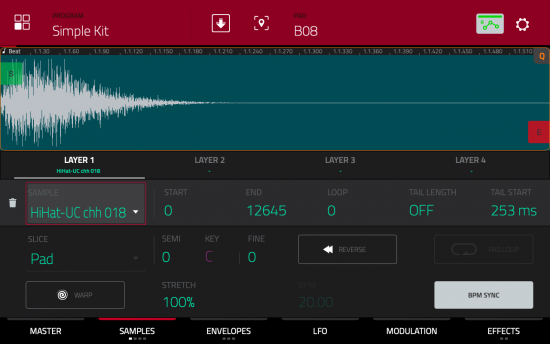 Now head over to PROGRAM EDIT > GLOBAL and change SAMPLE PLAY from ONE SHOT to NOTE OFF:

Now press and hold pad B08….nothing happens! But now release pad B08 and upon release you’ll hear the closed hat play (one shot style, from start to finish). Hmm, okay, a pad that doesn’t play until after you release it… interesting… but how is this useful?

Jump back to BANK A and select our original ‘note on’ style open hat pad A08. In the GLOBAL screen set the top SIMULTANEOUS PLAY parameter to B08: 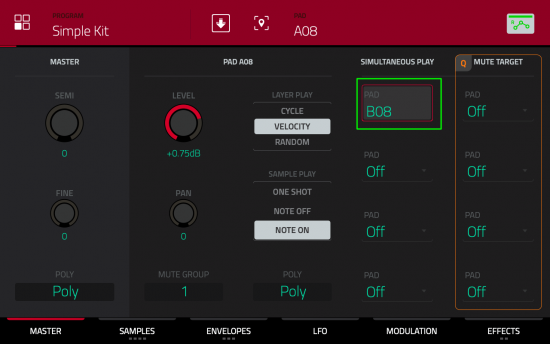 If you’re not familiar with simultaneous play then you can probably guess what this feature does; it simply allows us to hit just one pad but have multiple pads play ‘simultaneously.

So, press and hold pad A08 – as before, the open hat plays while you hold down the pad. But now when you release the pad you’ll then hear the closed hat trigger automatically – there’s no longer any need to separately hit the dedicated closed hat pad to complete the open/close action.

So what exactly is happening here? Well (thanks to simultaneous play) when we hit pad A08 we also trigger pad B08. But as B08 is set to NOTE OFF it remains silent until we actually release pad A08. When we do, pad B08 is also ‘simultaneously’ released and the NOTE OFF action is completed, which leads to the B08 closed hat being played.

Unlike our original muted arrangement, this option only needs you to actually play a single pad (A08) to perform the entire open/close action. You’ll still need a dedicated closed hat pad for normal closed hat patterns, but this ‘note off’ method provides an interesting open hat alternative when finger drumming.

The Completed ‘Note Off’ Kit

Load up my final version of this kit from the Tutorial Files folder, ‘Note Off Drum Kit.xpm’.   Here I’ve also added some additional pads that utilise this ‘note off/simultaneous play’ combination. Remember to experiment with how long you hold down the pad before releasing as this will give you different results.

On pad A05 I’ve set up a tambourine combination – hitting the pad plays a ‘down’ tambourine sample, while releasing the pad plays the shorter ‘up’ tambourine. Pad A06 features a couple of melodic hits, pad A07 is a kick with a melodic hit ‘release’, pad A08 is our open hat/closed hat combo and pad A09 is two softly hit snare samples – this can be used to create short snare rolls (often called ‘drags’).

I’ve placed all the ‘note off’ pads out of the way in a completely separate pad bank (BANK B), leaving bank A reserved for the pads I actually want to play directly. This is of course optional, you could also place the ‘note off’ pads in bank A, or put them in any other bank of your choice.

I also like to ‘mirror’ the pad number used in my simultaneous play pads, for example if the ‘main’ pad was A13, any ‘simultaneous play’ pads associated with it would be placed on B13, C13, D13 and so on.  I just find it makes it easier to keep track of everything.

Pads like these could also be combined with round robin ‘cycle kit’ techniques to create very realistic sounding acoustic drums. In fact I’ve also configured pad A09 to make use of the MPC’s new ‘randomisation’ features which can add a small amount of variation to your sounds (randomisation settings are found by going to PROGRAM EDIT and pressing the ‘SAMPLES’ button 4 times): 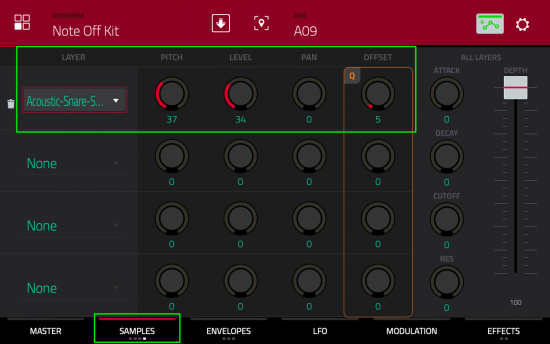 I look at randomisation techniques in more detail in the MPC Bible, along with MPC 2.10’s many other new sound design features including sample tail, pitch envelope and the dedicated ‘drum FX’.